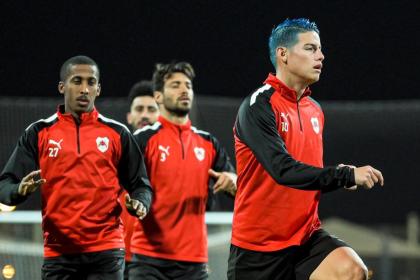 A king dead, king set! Thus, without wasting a minute, Al Rayyan changed his coach, in order to improve the course of the Qatar League.

In the early hours, James Rodríguez was left without a coach, when Al-Rayyan made the decision to end the Frenchman’s contract in view of the poor results.

Al Rayyan is ninth in the Qatar Stars League with 18 points, the product of 4 wins, 6 draws and 7 losses.

With Blanc there were four dates without victories and that ended the patience of the millionaire owners of the club, who reached an agreement with the Frenchman to end his stay in the country, a year and two months after having relied on his prestige to Guide the team to privileged positions that never came.

With Blanc, James Rodríguez played 10 games and scored three goals, a balance below expectations considering the fortune that the Colombian costs in the squad.

Precisely to get a better performance from the Colombian, the club made a radical decision: they trusted a Latin American, the Chilean Nicolás Córdova.

The good news for James is that now the boss will speak to him in Spanish, which is not a minor detail in his adaptation to the team’s game.

The new boss emerged as a player in Colo Colo and developed almost his entire career in Italy, in teams like Crotone, Parma and Brescia. At 43 years old, he has already managed Palestino and Santiago Wanderers in his country, as well as Universitario from Peru and now Al Rayyan, a team he joins after his experience directing the U23 Qatar team.

Because of the transfer: Next Bellingham prospect before the jump?