Zárate to Gymnastics? Mauro made a decision

Finally, the striker will not arrive at the Lobo and awaits offers from abroad to define where he will continue his career.

End for one of the novels of the Argentine soccer pass market! Finally Mauro Zárate will not play in Gymnastics, the striker did not accept the Wolf’s proposal and waits to define his future.

The La Plata team had approached a formal offer to the former Boca and Vélez to try to seduce him and there was optimism in the club. Until Pipo Gorosito had communicated with him and although details about the talk with the DT did not come out, Lobo’s idea was to be able to replace the short-term attacker by Brazil at Flea Rodriguez, one of the strong cards up front. 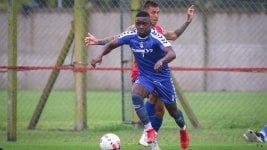 After several days of negotiations and some to think about it, Zárate decided not to accept the Gymnastics proposal, especially due to the economic issue. Now the scorer is waiting for offers from abroad to define his next club, specifically from Spain and Italy. There would be a supposed offer of the Salerno, from Serie A, but there are still no details about the future of the 34-year-old striker.

The numbers of Mauro Zárate in America from Brazil

Since his arrival at the Brazilian team he played 16 games and 1081 minutes, in which he scored a single goal and provided two assists. He was a starter 14 times, he came on from the bench twice, one date had to comply with a suspension due to the accumulation of yellow cards and between dates 25 and 27 of the championship he was not summoned by the coach.