The ‘2021 SBS Drama Awards’ was held on December 31st last year. The ‘SBS Acting Awards’, which was hosted by Dong-Yup Shin and Yoo-Jung Kim, was held without spectators and non-face-to-face trophies to prevent the spread of Corona 19.

The grand prize, the flower of the awards ceremony, went to Kim So-yeon of ‘Penthouse 3’. Kim So-yeon took on the role of Cheon Seo-jin, the director of the Cheong-A Foundation, in ‘Penthouse 3’, which ended in September, and gave birth to an unprecedented villain who would not hesitate to kill for her own success.

In addition to this, while the actors who received the viewers’ love this year enjoyed the honor of receiving the award, we collected the impressions of the award that caught the viewers’ attention. 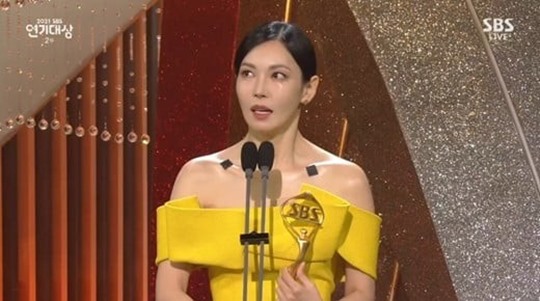 ◆“Starting as an assistant performer 28 years ago”… Kim So-yeon, ‘fever’ at the grand prize

Kim So-yeon, who won the grand prize at the ‘2021 SBS Acting Awards’, went on stage with tears in her eyes. He continued, “I started as an assistant performer 28 years ago. That work was an SBS drama, and I can’t believe it because it gave me a huge award, and I feel so sorry that I deserve this award.”

He continued, “‘Penthouse’ director Joo Dong-min, everything you showed on set was the director. And thanks to writer Kim Soon-ok, I feel like I am here. I am truly grateful. To all the wonderful ‘Penthouse’ production staff and actors. I miss you so much.” He said, “I was worried and worried about whether I could do well in ‘Penthouse’, but I really appreciate and love Lee Sang-woo, who became a mentor by my side. I will continue to become an actor who cherishes each God. Thank you very much.” 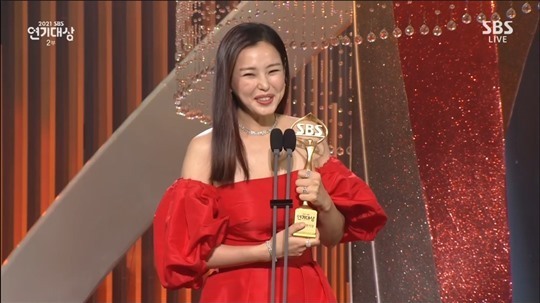 Lee Ha-nui “Surprising marriage announcement, that’s what happened after ‘One the Woman'”

In this year’s ‘One the Woman’, she gained popularity by playing two roles, including Jo Yeon-joo, a 100% female prosecutor who entered the villain chaebol family, and Kang Mi-na, the youngest daughter of the conglomerate Yumin group. Honey Lee, who was nominated for the grand prize for ‘One the Woman’, said, “Even if I win an award or not, I feel honored.

Honey Lee surprised the world by announcing the news of her surprise marriage to her non-celebrity husband on the 21st. When MC Shin Dong-yeop mentioned the marriage, Honey Lee said, “I think I was very surprised,” and “It happened after the drama ended. Thank you to all the people who congratulated me.” 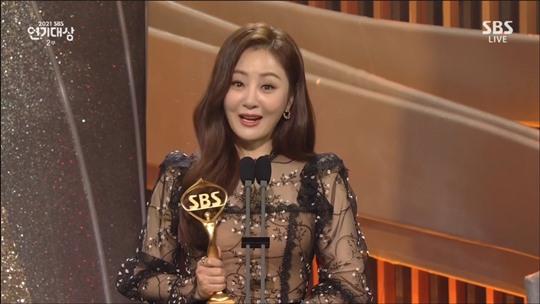 ◆Nara Oh, tears at the Best Character Award… “For the first time at a broadcasting station”

Oh Na-ra, who played the role of Ra Young-ja, a living legend in the badminton world in ‘Racquet Boys’ and the nation’s No. Nara Oh, who came on stage right after the countdown to 2022, said, “Luckily, I became the first winner of the new year. Last year, I was happy to meet a work full of humanity called ‘Racket Boys’.

He continued, “Actually, this is my first time receiving an award from a broadcasting station. It is very meaningful to receive my first award from SBS. This award seems far from me, so I have been working with the thought that I am grateful just to be on the set, and it is recognizing that. I’m thankful for the same. It’s been a long time, but I want to brag about this award to a new person all the time. I will continue to be an actor who is used as an important accessory to brighten up the work without trying to shine at the center.” 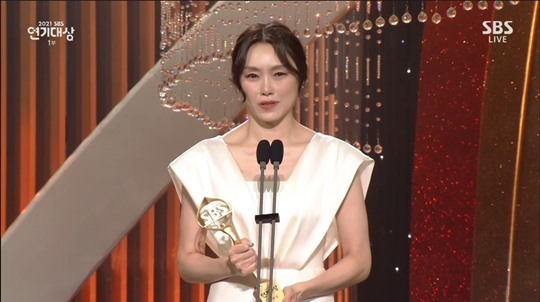 ◆“I am loved because of my husband’s dedication”… ‘Exemplary Taxi’ Cha Ji-yeon, ‘crying’

Cha Ji-yeon, who left a strong impression by playing the role of Baek Baek-mi, who is called the ‘godmother’ and a great grandson of the underground finance world in ‘Model Taxi’, won the Best Supporting Actor Award in the Miniseries Genre/Fantasy Category at the ‘2021 SBS Acting Awards’. Immediately after receiving the award, he said, “Thank you for giving a good award to a person who is too lacking. Thank you to director Park Jun-woo for entrusting me with a wonderful role, who was unfamiliar with the camera. Also, thank you to the cinematographer and martial arts director.” I will do it with all my heart in the moment. I was able to be loved because of my husband’s dedication. I respect and love you.” 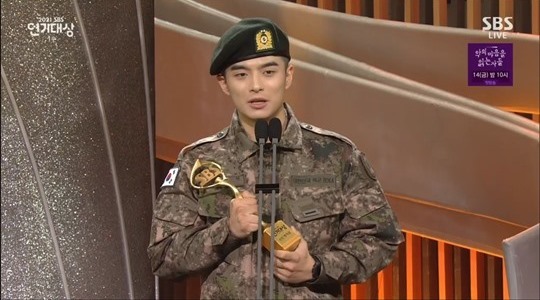 Son Sang-yeon, who played an active role as Bang Yun-dam, a badminton player in Haenam Seo-jung, who combines looks and skills in ‘Racket Boys’, won the Best New Actor at the ‘2021 SBS Acting Awards’. Son Sang-yeon, who enlisted in the army as an active duty soldier last November, wore a military uniform and went on stage to attract attention.

Son Sang-yeon, who participated in the awards ceremony while on vacation, said, “I did not expect to receive such a valuable award while serving in the military.

tremble too much I want to say thank you very much to the production team, staff, and actors who worked with ‘Racket Boys’. I am also grateful to the management company, and to my mother and father who allowed me to grow into a wonderful son. After completing my military service, I will come back with a good image.”

De Ligt has made a decision for January

University of Sancti Spiritus and its efforts for...

Why is paddle tennis not an Olympic sport?