Home football Why Boca, driven by Riquelme, wants Tinelli out of the Professional League
football

Why Boca, driven by Riquelme, wants Tinelli out of the Professional League

The vice president of Xeneize, who went to a meeting of the LPF for the first time, has a clear reason to ask that the businessman and driver of the presidency of the entity be removed.

Juan Román Riquelme surprised everyone this afternoon by making himself present as Boca’s visible face at the meeting to try to advance the intention to remove Marcelo Tinelli from the presidency of the Professional Soccer League. It was the first time that the vice president of Xeneize attended a meeting of the entity that brings together all the First Division teams and why he did it is clear: he wants the businessman, driver and president of San Lorenzo out of his position.

The reason for the position of Riquelme and, of course, of all Boca has to do with what happened back in late July, after the scandal that the team led by Miguel Ángel Russo at that time starred in Brazil, after being eliminated from the Copa Libertadores at the hands of Atlético Mineiro. When returning from Brazilian lands, the entire professional staff was isolated by disposition of the national government, since they considered that they had broken the health bubble during the riots.

What The days of confinement coincided with the duels that Xeneize had to face against Banfield and San Lorenzo, Román and company asked Tinelli and Spinoza, General Director of the Professional League and president of the Drill, to postpone them, but the answer was negative. There was even a second attempt to delay the July 27 match against Cyclone for 24 hours so that professional footballers could play, but the request was also denied. Thus, the Ribera club had to play both games with the Reserve.

Now, Riquelme seems determined to want to collect that double negative that forced Boca to put kids who, for the most part, had not yet debuted in the First Division. Román and Xeneize were accompanied in their position by 15 other clubs of the highest category of Argentine football.

Why Boca, driven by Riquelme, wants Tinelli out of the Professional League 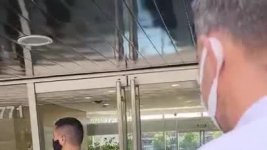 Generally, Roberto Digón, 3rd vice president of Xeneize, or Ricardo Rosica, General Secretary of the club, are the ones who are present for Boca at the meetings of the entity that brings together all the teams of the First Division. Today, for the first time since he was a leader, it was Riquelme.

How a football club works for the Amazon

CAN: Burkina Faso takes out Gabon on the...

“We have to mentally rebuild Ansu Fati”

“We have to mentally rebuild Ansu Fati”