Phrases, quotes and aphorisms about Judo

The word “ju-do” is made up of two ideograms, “ju” which means non-resistance, sweetness and “do” which means path, way. Non-resistance is therefore the key concept of this discipline: not to oppose the opposite force, but to give in and then control it, unbalance it and overwhelm it with minimal effort.

There are two principles that found and regulate the noble art of Judo, conceived by the great master Kanō Jigorō: “Seryoku zenhyo” and “Ji ta kyò ei”. The first means “the best use of energy, physical and moral”, while the second principle concerns “Friendship and mutual prosperity”.

Phrases, quotes and aphorisms about Judo 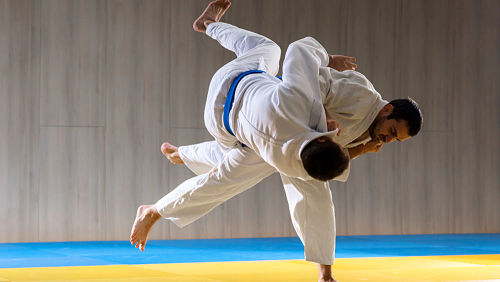 The principle of Judo, from the beginning, is not that of aggression, but of flowing together with things.
(Carl B. Becker)

Judo is the way to the most effective use of physical and spiritual strength.
(Jigoro Kano, founder of Judo)

If you win, do not glory in your victory; if you lose, don’t be discouraged. When you are safe, don’t be careless; when you are in danger do not be afraid
(Jigoro Kano, founder of Judo)

The purpose of judo training is the completion of oneself and the preservation and growth of the world.
(Jigoro Kano, founder of Judo)

“Ju” means to be natural or – in other words – the way which is natural and in accordance with the truth of the universe and which human beings must follow. Furthermore, “Ju” can mean anything reasonable, just and honorable, and consequently noble: namely, the realization of Truth, Good and Beauty.
(Kyuzo Mifune)

Judo is based on the flexible action of the mind and body. However, the word flexible never means weakness but something more like adaptability and open-mindedness. Kindness always wins over strength.
(Kyuzo Mifune)

There is nothing greater in the world.
A person’s moral education extends to another 10,000.
The education of one generation embraces another hundred.
There is nothing more pleasant in the world. Cultivating talent and improving your fellow man, a perfume that lasts long after death.
(Jigoro Kano, founder of Judo)

Judo helps us understand that worry is a waste of energy.
(Jigoro Kano, founder of Judo)

Ju means adapting to the opposing force in order to gain full control. Example: if I am attacked by an opponent who pushes me with a certain force, I must not fight him, but at first I must adapt to his action and, using his strength, attract him to me by making him bend his body forward.
(Jigoro Kano, founder of Judo)

Judo, the art of winning by giving up. The Western equivalent of the word Judo is “Yes dear”.
(J. P. McEvoy)

Think of your opponent’s limbs as swords.
(Gichin Funakoshi)

When someone attacks you, they give you their strength. To take advantage of this gift, you need to know how to receive it.
(Yukiso Yamamoto)

One thing I learned from judo: maximum efficiency and minimum effort.
(Rosey Rousey)

Judo is an awkward set of bodily contortions designed to produce a graceful result.
(Anonymous)

Judo has the nature of water. The water flows to reach a balanced level. It has no shape of its own, but takes that of the container that contains it.
(Gunji Koizumi)

The sweetest aspect of nature is water. It follows the path of least resistance and is the humblest of all elements as it always seeks the lowest point, but always wins in the end.
(Lao Tzu)

A Judo master never relies on his own strength, which he barely uses in the event of a major emergency. What do you use then? It simply uses the strength of its antagonist. The opponent’s strength is the only means by which he is overcome.
(Lafcadio Hearn)

Don’t think of offense and defense as two separate things. An attack will be a defense and a defense will be an attack.
(Kazuzo Kudo)

The underlying purpose of Judo is to allow a physically weaker person to defend against a physically stronger opponent.
(Not Harrison)

I warn you, do not make me angry: I know Karate, Judo, Taekwondo, Jujitsu and other 28 dangerous words.
(Anonymous)

“Ouch” is not a judo term.
(Neil Ohlenkamp)

In holding your antagonist, you should hold him lightly as if your arms are nothing more than chains that bind you to him, so that you can stretch or contract them as you please when necessary, and pull or push him in any direction you want.
(Sakujiro Yokoyama e Eisuke Oshima)

There are people who are naturally excitable and get angry for the most mundane reasons. Judo can help these people learn to control themselves. Through training, they quickly realize that anger is a waste of energy, which only has negative effects on themselves and others.
(Jigoro Kano, founder of Judo)

The technique and the mind are just like the front and back of a hand, which means they are closely related.
(Yoshitsugu Yoshiaki Yamashita)

Before and after practicing Judo or taking part in a match, opponents bow to each other. Bowing is an expression of gratitude and respect. In fact, you are thanking your opponent for giving you the opportunity to improve your technique.
(Jigoro Kano, founder of Judo)

It can be said that the primary objective of Judo practice is the improvement of character.
(H. Seichiro Okazaki)

In practical terms, spending whole years learning judo for the sole purpose of repelling an attack is foolish. Since judo derives from the martial arts of the past, it must perpetuate its spirit. They placed great emphasis on loyalty, faith, honor and various other virtues, the importance of which, it must be emphasized, remains even in today’s world.
(Jigoro Kano, founder of Judo)

The fixed thought of having to win at all costs – projection into the future – or of not being defeated – bond with the past – causes a psychological fixity that makes us uncertain and takes away the possibility of being available for action
(Jigoro Kano, founder of Judo)

While in competitive sports the goal is confined to the narrow scope of seeking victory, that of judo proposes a broad and complex purpose, so much so that we can define competitive sports as a partial application of the objective in which the discipline of the sport is recognized. judo.
(Jigoro Kano, founder of Judo)

The secret of judo is serenity of mind.
(Watanabe e Avakian)

A treacherous blow?
The kiss of Judo.
(Tragi_com78, Twitter)

If when he takes your hand you see the world upside down, it is love.
Or a black judo belt.
(Tristemietitore, Twitter)

As a child I enrolled in judo and karate, but I never finished them.
I’m a black belt in partial arts.
(Fabrizio Caramagna)

The collaboration between the student and the teacher and between practitioners during the study of the techniques, goes in a direction that, through mutual help and mutual respect, leads to the improvement of the skills of personal, social and moral relationships; this, if assimilated internally, can also be applied in the society in which we live, improving it through concepts such as “non-resistance” or “flexibility”.
(Jigoro Kano, founder of Judo)

A person’s true value is determined by the contribution he makes to the community throughout his life.
(Jigoro Kano, founder of Judo)

It is beyond the power of the pen to explain the delicate points of Judo and the mysterious mental action that comes with it. Even if these things could be written, they would hardly be understood by anyone who is not master of the secrets of Judo.
(Sakujiro Yokoyama e Eisuke Oshima)

NBA: Bulls and Heat penalized for communicating too quickly with Ball and Lowry

Schoolchildren tested archery as part of the 2024...

The Eagles match against Meaux postponed

Remiremont: the Judo and Taïso club is doing...

Who is Mathias De la Colina, the nugget...