Chairman Kim Doo-hwan posed with a wide smile at the Yangjae Sports Time tennis court in Seoul on the 29th of last month. “Tennis is the best sport where you can have fun, keep your health, and meet good friends,” he said. Reporter Lee Hoon-gu [email protected]

It’s really nice to have one sport that you can enjoy for the rest of your life. Because you can take care of your health and meet good friends. Jangho Tennis Foundation Chairman Kim Doo-hwan, who is 80 years old in Korea, has been playing tennis for the rest of his life, creating a pleasant and happy old age. He started playing tennis in high school and was active in the national team. After that, he has been actively working for the development of tennis by strengthening his stamina without putting down his racquet. 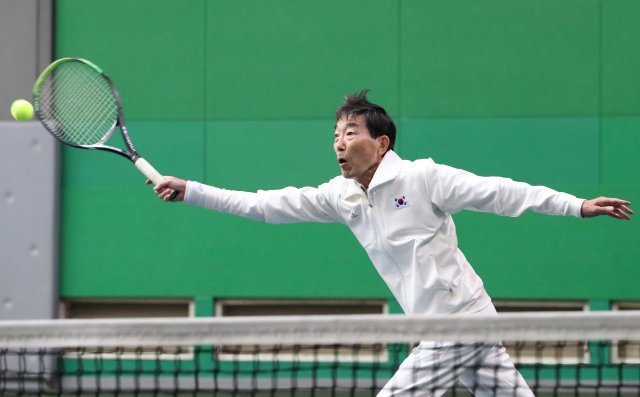 Chairman Kim Doo-hwan volleys the ball handed over by his opponent at the Yangjae Sportstime Tennis Court in Seoul on the 29th of last month. Even at the age of 80, he showed a strong service in volleys, smashing, and left and right strokes that stabbed the corner. Reporter Lee Hoon-gu [email protected]

On the 29th of last month, Yangjae Sportstime Tennis Court in Seoul. In the mixed doubles match played by members, Chairman Kim showed off a powerful service in volleys, smashing, and left and right strokes that stab the corners. Even though he was a player, it was a play that he could not play unless he managed it for the rest of his life. He said, “After I play tennis like this, I feel like flying. Have fun, take care of your health, and meet good people… . It’s the best sport.”

“I had a talent for sports from a young age, probably because I got the blood of my father and brother who played soccer. I was good at everything like soccer and basketball. I started playing softball at Dongnae Middle School in Busan. A soccer player was also involved. Even after going to the prestigious Dongrae High School in soccer, he was active as a soccer and softball player. When I got to college, I stopped playing soccer and focused on tennis. People around me advised me that individual events were more promising than team sports.” 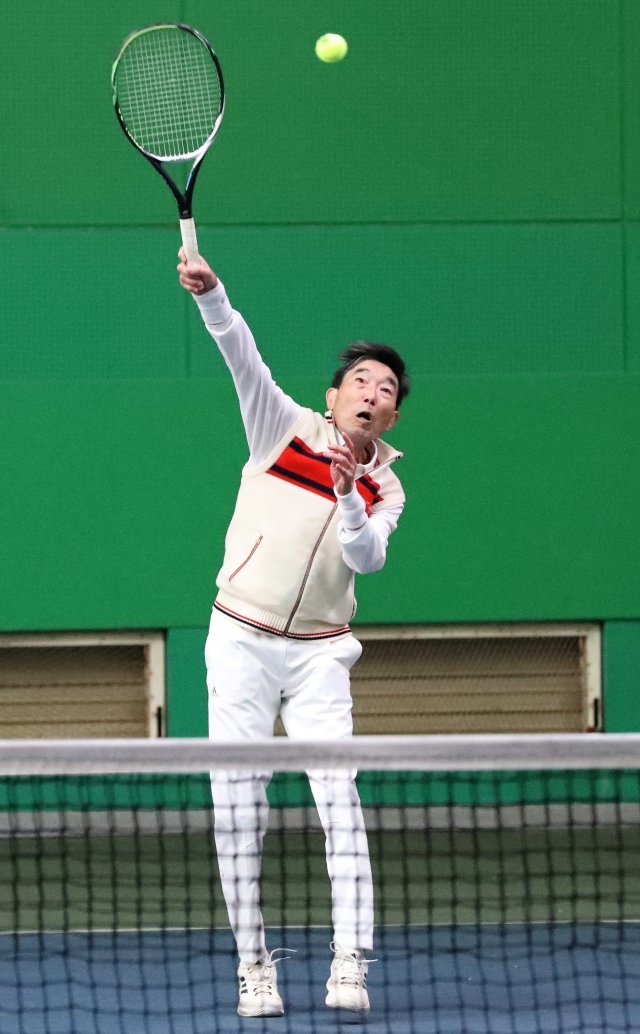 Chairman Kim Doo-hwan is using strong service at the Yangjae Sports Time tennis court in Seoul on the 29th of last month. “Tennis is the best sport where you can have fun, keep your health, and meet good friends,” he said. Reporter Lee Hoon-gu [email protected]

Chairman Kim’s older brother is the late Kim Doo-shik, former director of Chungju High School (Daegu). Byun Byung-joo (former Daegu FC manager) and Park Kyung-hoon (Executive Director of the Korea Football Association) were raised and made Chungcheonggo into a prestigious football club. The reason why Chairman Kim made a relationship with tennis is interesting. When he was a sophomore at Dongnae High School, he changed from a soft tennis ball to tennis because he wanted to visit Seoul.

“I started playing softball tennis in my second year of middle school. In 1958, when I was a sophomore in high school, I lost to my 3rd graders in the Busan preliminary round of the National Sports Festival and was eliminated. At that time, Seoul was the place I wanted to go as much as foreign countries. That year, the National Sports Festival was held in Seoul. A senior leader said, ‘Then change to tennis. There aren’t many teams, so you can go out just by registering.’ So, with one month left before the national championship, I switched to tennis.” 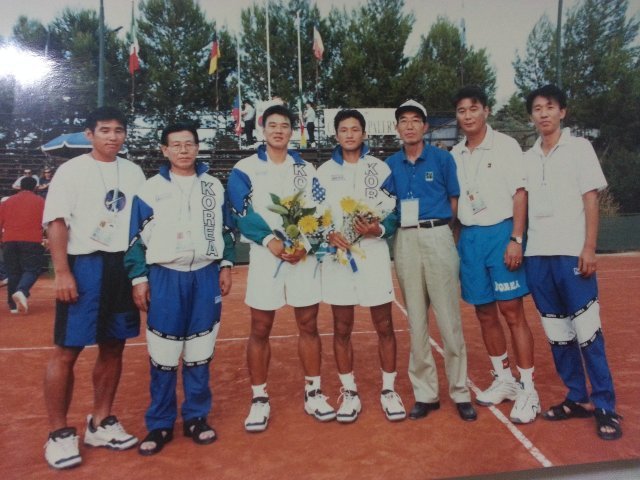 I didn’t get a medal at the National Sports Festival, but I gained confidence that ‘I can do it’. He said, “When I looked at the quarterfinals and above, they were all third-year hyungs, and there were no second-year hyungs. “I thought I could win next year,” he said. From that winter on, he focused on tennis, and the following year he won almost all competitions, including the category championships and national championships. In 1962, three years after starting tennis, the Taegeuk mark was placed. He reigned supreme by winning the Korea Tennis Championships (victories in 1962 and 1969), and played an active role as a representative of the Davis Cup (Southern National Competition). At that time, she participated in mixed doubles at the 1969 All-Japan Championships as a partner with Yang Jeong-soon, director of the Jangho Tennis Foundation (74), the strongest woman at the time, and lifted the trophy at the first international tennis tournament in Korean history. Yang is a gold medalist at the Asian Games in Tehran in 1974 and Bangkok in 1978.

After completing his career at Hanil Bank in 1971, Chairman Kim did not put down his tennis racket while working as a bank employee, businessman, and sports administrator. “Tennis is a more attractive sport,” he said. It protects my health and I was able to maintain good relationships with people I met through tennis.”

“I was at a bank, and a four-year-old senior in high school in Busan asked me to help him make tennis balls. Every weekend, I went down from Seoul to Busan to evaluate the weight and elasticity of the ball I made. Leopard made a tennis ball. My senior entrusted me as the sole distributor because there was no one to sell tennis balls to. So I quit banking and started my own business. At that time, I was running a business under the name of ‘Kim Doo-hwan’. At that time, tennis was played by many prominent people in society. People who know me have helped me a lot.” 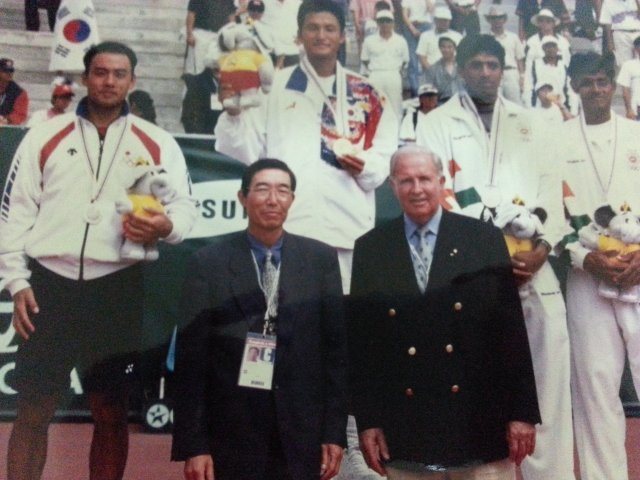 While expanding its business to footwear and sportswear, various companies appeared and the competition intensified. After leaving the business, he served as executive vice president, vice president, and president (1993-2001) of the Korea Tennis Association, playing for the development of tennis. Initially, a person from a company was supposed to be the head of the association, but it was not feasible, so Chairman Kim took over as chairman for a period of time and eventually led the association for eight years. At that time, the association did not have any operating expenses, so a fund-raising campaign led by tennis players was launched, and for this effort, the government subsidy was also received.

“The budget of the association was only 32 million won. The national competition cost 25 million won. I had no choice but to raise a self-reliance fund. As our efforts like this got through the media, the government took an interest in it and received a generous amount of subsidy.” 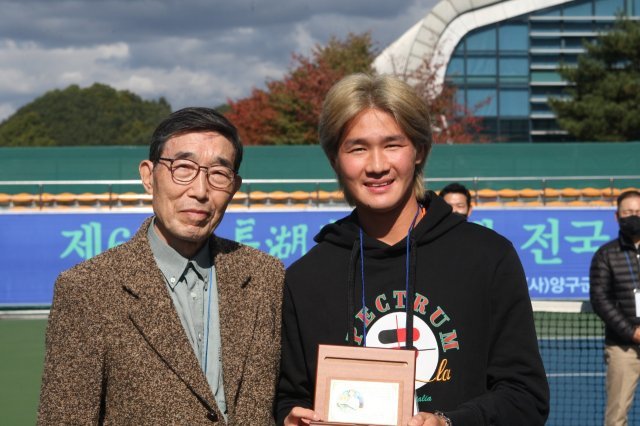 Tennis is the driving force behind such a vigorous activity even in eighty years. Chairman Kim underwent surgery for liver cancer in February 2006, but overcame it quickly enough to participate in the senior international tennis tournament in the fall of that year. He said, “Thanks to the stamina that I had developed through tennis, the surgery endured well and the recovery was quick. Tennis is my life support,” he laughed.

“In individual sports such as tennis, table tennis, and badminton, there are many cases where people continue to exercise and maintain their health even after playing. In team sports such as baseball or soccer, it is rare to quit playing and continue playing in those sports. People have to gather. That’s what tennis has to offer.”

Chairman Kim plays tennis with his acquaintances once or twice a week. 2 to 3 hours at a time. Even these days, people in their 50’s and 60’s are ‘fighting’. Even if there is a difference of 20 years or more, I am not pushed at all. Amateur tennis is mostly played in doubles or mixed doubles for more people to enjoy. This naturally leads to good relationships with ‘tennis friends’. 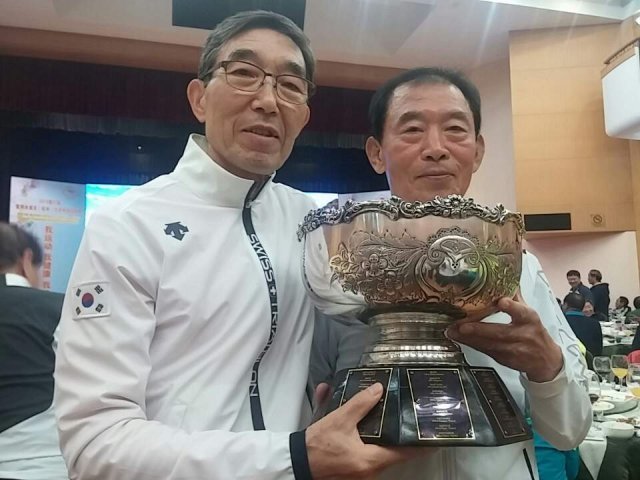 “I think tennis is difficult, but anyone can play. You only need to invest 6 months. However, it is an overpayment of old age. It’s good to hit it in moderation. Trying to keep your health can actually ruin it. Someone I know died playing tennis until the age of 101. Tennis is the best silver sport.”

Chairman Kim also plays golf once a week. I used to ski in the winter, but now it’s dangerous so I quit. To enjoy tennis and golf like this, every day, he walks along the hillside of Mongchontoseong Fortress in Seoul Olympic Park near his house to build up his stamina. “I still like tennis the best,” he said. My wish is to hit as hard as I can and die on the tennis court.”

Copyright by dongA.com All rights reserved.

Marc Gasol, unrivaled on his return to Girona: 39 valuation in 21 minutes