They see double, one in gold, the other in rainbow! Clarisse Agbégnénou and Julian Alaphilippe are crowned “Champions of champions” in 2021 by The team. This year, they set a goal, and they achieved it.

For judoka, the Olympic title in Tokyo, in the – 63 kg category, completed, the icing on the cake, by gold with her comrades from the France team, as well as a fifth world title. And for the rider, the right to wear the world champion’s jersey for one more year, after his victory in Louvain, in Flanders, the country of cycling, not to mention a stage victory and a day in yellow on the Tour, and the Flèche Wallonne.

When it comes to describing the year 2021 of Clarisse Agbégnénou, superlatives rain: extraordinary, golden, perfect … In less than two months, the judoka licensed in Champigny-sur-Marne has erased all her opponents and won, in quick succession, a fifth title of world champion, on June 9, the Olympic title in individual, on July 27, and that by teams, on the 31st.

For the flag bearer of the tricolor delegation in Tokyo, the highlight of her year certainly took place at the Nippon Budokan. 6:45 p.m., women’s final in the -63 kg category. In front of her, Tina Trstenjak, the Slovenian who had deprived her of Olympic gold, five years earlier, in Rio. Golden Score. The first judoka to score a point wins. Time for revenge. After five minutes of a stifling fight, Clarisse Agbégnénou tilts her opponent on the tatami. Waza-ari. End of the fight. Olympic champion. 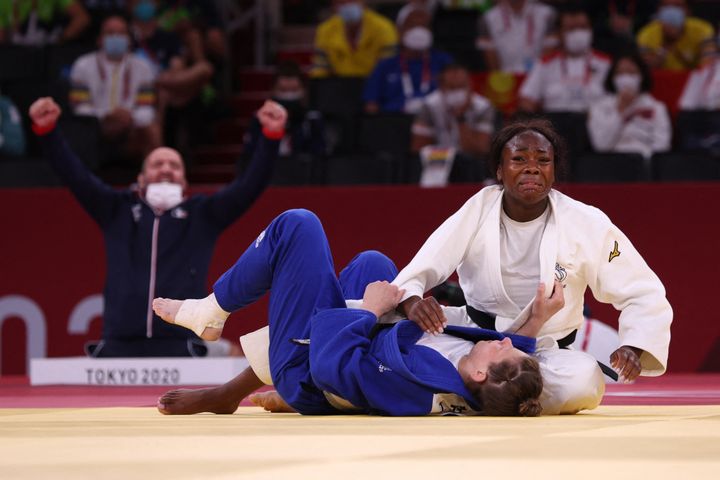 Clarisse Agbégnénou in tears after defeating her former pet peeve, Tina Trstenjak, in the final of the Tokyo Olympics, July 27, 2021. (JACK GUEZ / AFP)

Tears flow, instantly. Then the sign of a heart, towards the stands. And the explosion of joy, in front of the microphones: “I am in an impossible happiness. I could not have imagined better!”

“Each time, I tell myself that yes, I’m going to win, I’m strong, in good shape. To say it, it’s one thing, but to do it in the final, to take revenge, it’s incredible!”

A few minutes after the fight, her mother, Pauline, who remained in France because of the epidemic, compliments her through the media. “You worked for, and you did. It’s beautiful! Tu remain as you are, humble, without taking your head, with the joy of living. You’re great ! Mom’s daughter. “

For journalists from The team, who elected Clarisse Agbégnénou “Champion of the champions” French, it was obvious. “Even before the vote, we suspected that she would be well ahead and she is. It was sure that she was going to win”, describes Frédérique Galametz, editor-in-chief at The Team.

“She amazed the whole of France at the Olympic Games”, she estimates, showing “Huge things, especially in her final against the Slovenian, then in the mixed team event. She is a great champion, very involved in life too”, especially against violence against women.

“You can hardly do better than going to the Games, competing for two medals and coming back with two gold.”

A day of madness on the Flandrian roads. September 26. In the Côte de Saint-Antoine, 17 kilometers from the finish, a blue jersey sprang from the peloton of favorites, wrung out by the hellish train led by the French riders. Julian Alaphilippe uses his puncher qualities, and escapes. Behind him, we look at each other. No one will see him again. He won, alone, and for the second time in a row, after Imola, in 2020. Never has a French rider won the World Road Cycling Championships twice, let alone two consecutive years.

On the podium, rainbow jersey on his shoulders, he overthrows the Belgian public, yet won over to the cause of the local race, his rival and favorite, Wout Van Aert. Alaphilippe launches a clapping, followed by thousands of spectators. Aware that he marks the history of his sport, but far from taking the big head, Julian remains humble, as “I have always been”, he declares after his world title.

Double world champion, 18-day yellow jersey and winner of six stages on the Tour, multiple winner of Classics. At 29, the Montluçon runner is not yet satisfied, and “always wants to have dreams, otherwise life sucks”. And why not dream of yellow, on the Champs-Élysées? The question is often asked since his fifth place overall, in 2019.

“Am I able [de jouer le général du Tour] ? Maybe I will answer them in the future. “

But Julian Alaphilippe is first and foremost a puncher, one of the best fireworks in the peloton, capable of blasting one day’s races to win them brilliantly, alone or in a sprint. “My goals remain to win great Classics [Flèche Wallonne, Milan-San Remo, déjà gagnés], other monuments [Tour des Flandres, Amstel Gold Race, Liège-Bastogne-Liège, pas encore à son palmarès]”, he confirms.

And why not go for a third world title, from 2022. The Australian course, including a very steep bump eight kilometers from the finish, could suit him. What to imagine three rainbow swimsuits, like the legend Eddy Merckx.

Julian Alaphilippe was named French “Champion of Champions” by L’Équipe journalists, but with less lead over his pursuers than in 2019 and 2020, where he had already been distinguished. The first French Moto GP world champion, Fabio Quartararo, and the winner of the big Crystal Globe, alpine skier Alexis Pinturault, completed the podium.

“Julian Alaphilippe also has this very popular side, he entered the hearts of the French.”

The vote was tight, confides Frédérique Galametz, but the editor-in-chief at the newspaper The team insists on his style on the bike, “his way of behaving” during the Worlds. Attack 17 kilometers from the finish, and “believe in”, hope to win alone, “it marked the journalists a lot”.

This NBA player got a rebound by tying his shoe

Calendar for 2022 of the International Judo Federation

Sarzeau, cradle of Medieval TV, the TV of...

Who are the high school students who died...

Traveling with 150 grams of cocaine and hashish:...

The Beijing Olympics in the global context, Covid...

The Minister of Sports on the move this...