The event held this Friday at the Mario León Guzmán Coliseum in the capital of white gold was led by the Sports League for Physical Disability of Córdoba and the group of Inclusive Volunteers of Córdoba and had the support of the International Red Cross.

“We are very grateful to this entity for its support of the Paralympic sport in Cordoba, where they have made many contributions to consolidate the different sporting processes. It should be noted that in terms of logistics and scenarios, the Cereté Disability Office supported us, led by Lina Petro ”, said coach Jesús Kerguelén Soto.

Athletes from Montería, Lorica, Ciénaga de Oro, San Pelayo and Cerete participated in this event. “It should be noted that many of these young people are part of the sportsmen characterized in the framework of the ‘SumatePARAInspirar’ project led by the ADA Foundation in the department of Córdoba,” said Kerguelén Soto.

It should be noted that this event is part of the activities that the league has scheduled to commemorate the international day of people with disabilities, which was this Friday, December 3. 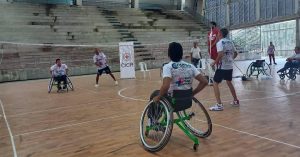 “I no longer have respect for Dewaest”