CB Majadahonda against Guadalajara this Saturday (20:00)

Basketball: CB Majadahonda, on a roll

MANU RAMOS. Basketball returns to Majadahonda and on a roll. «With the whole team in full force and with the clear intention of returning to the path of victories, Lujisa Guadalajara faces this weekend’s game. The twelfth day sends Román Peinado’s team to the Príncipe Felipe de Majadahonda pavilion where a team located in the middle area of ​​the table awaits him and arrives after two consecutive wins, the last one in the complicated field of the Canarian Güímar. For its part, Lujisa appears at the event after losing last Saturday at home against Uros Rivas (78-89). The game is this Saturday at 8:00 pm ». This is how the newspaper sums up New Alcarria the preview of the basketball game that takes place this Saturday, December 4 (2021) in Majadahonda. The majariego basket comes to this match after a tight but surprising victory for CB Majadahonda against Güímar de Tenerifem, which the Tenerife press reported as follows: «Transportes Gobra Güímar lost by a tight 69-72 against CB Majadahonda in an even match and very disputed from start to finish. A match that escapes CB Dadarmo in the last minutes after a bad last quarter, both in defense and attack, affirms the Tenerife team on its Facebook page. “We have to work, get up and recover injured”, for the double day that we will face this weekend “against Movistar Estudiantes and Zentro Basket Madrid. The dominance of the rebound was also key. A total of 30 (2 offensive and 28 defensive) captured Dadarmo versus 40 (7 offensive and 33 defensive) Majadahonda. Equalized was the first quarter that ended with 20-19 in favor of the Canaries, and also the second. Partial 18-18 and 38-37 at halftime. Güímar pressed when he returned from the changing rooms. He scored 19 points against Majadahonda’s 13 closing the third quarter seven points up, 57-50 on the scoreboard. But in the last quarter Majadahonda adjusted the defenses and more effective in attack he scored 22 points against 12 for Güímar and ended up taking the victory 69-72 ″, indicates Zona de Basket. 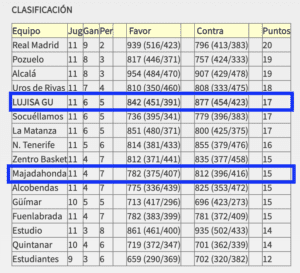 «A game on a complicated court, says the coach of CB Majadahonda, Jaime García, against” a tough opponent whose fundamental weapon is his solidity – offensive and defensive balance “, who comes from beating Uros de Rivas at home. According to the coach, the game “followed the established script. We knew that in order to qualify for victory we had to not disconnect from the match at any time ”. A highly contested match, he adds, “with many comings and goings on the scoreboard”, in which the physical factor “marked each attack and each defense”. “We knew how to understand the game and find our space,” emphasizes Jaime García. “We managed to grow without losing face or competitive character” and “we were able to set a defensive rhythm in which Güímar found it difficult to score.” All of this “helped us to improve offensively, being able to increase and improve our pace of play,” says the coach. Ultimately “we found better offensive situations with which we managed to get such an important victory,” concludes the chronicle.

Eleven of the Barça without Piqué, Frenkie de Jong nor Dembélé

Unsurprisingly, the Suns do not intend to upset...

LeBron James on His Way to Become the...