Fresh Czech tennis duo Lehečka: I want to be a lot higher. We don’t end here!

Jiří Lehečka in the archive picture

Lehečka joined the team on Monday as a fresh finalist in the Pau tournament, where he eliminated three Frenchmen led by former top 10 player Gilles Simon.

“Players from France probably don’t have me this year, the balance only intensifies it,” he smiled.

Although the opponents have to do without the highest ranked Monfils, their choice with Rinderknech, Mannarin and the doubles championship winners Herbert and Mahut is a clear favorite.

“But I would like to follow up on those winnings from Pau,” planned Lehečka, who jumped his teammates Zdeněk Kolář and Tomáš Macháč in the world rankings and became the new Czech number two. Now he is 138th in the world.

“It’s a good feeling when the ladder is rising, but I want to be a lot higher. We don’t end here! It doesn’t seem like it, there are 38 places in the hundreds, but also about 350 points, which is not very small. But after this season, we will throw it into it, “says the tennis player, who is trained by the son of the Davis Cup bench boss Jaroslav Navrátil Michal.

He has won four tournaments this year

“The captain helps us as much as he can and we are very happy for that,” says Lehečka, who this year won four titles at smaller tournaments in Egypt, Jablonec, Tampere and Bucharest. 117 matches.

“Four titles are nice statistics. It could have been more, but even less, I’m glad for it. I’m growing tennis and I want to keep improving. The main thing will be to find a good balance between the categories. The ATP tournament’s qualifiers are similar to those of the challenger. But the main competition is different, there are also players of fifty … But you can’t just focus on one goal, I’m not high enough to afford to play only ATP tournaments. I have to involve the Chalengers, “says Lehečka. 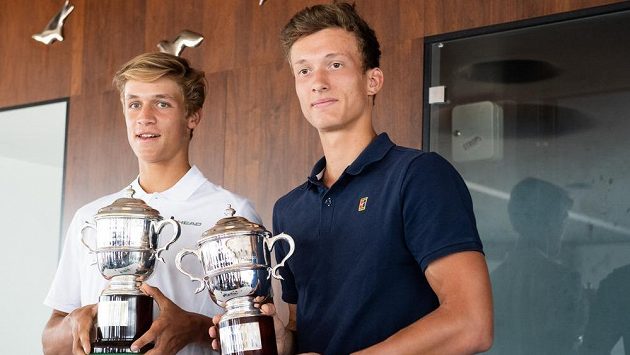 Jonáš Forejtek (left) and Jiří Lehečka after returning from Wimbledon, where they won the junior doubles.

Debut at the age of seventeen

Apart from Jiří Veselý, he is the only one from the current Czech team who played a single in the Davis Cup. In his Ostrava playoff in February 2019, at the age of seventeen, he bravely faced the experienced Dutchman Haase. Although narrowly lost, compliments were included.

“She is remembered beautifully. It was the first Davis Cup and such an experience. I was glad that I had a chance to show what I can do, “Lehečka said.

The Czechs could also bet on his poisonous game in Austria. “It is important to play as well as possible and to be 100% ready to board whenever needed. That is the main priority, “said Czech talent. And, of course, health.

“At the end of 2019, I had a fatigue fracture in my foot, then a problem with my left wrist, but it’s gone. Professor Pavel Kolář helped me a lot. I’ve been fine for the last two seasons, my health doesn’t bother me, “Lehečka believes that nothing will stop him from flying.

receives the 800 euro shoes from Mourinho

Lionel Messi called in sick the day after...