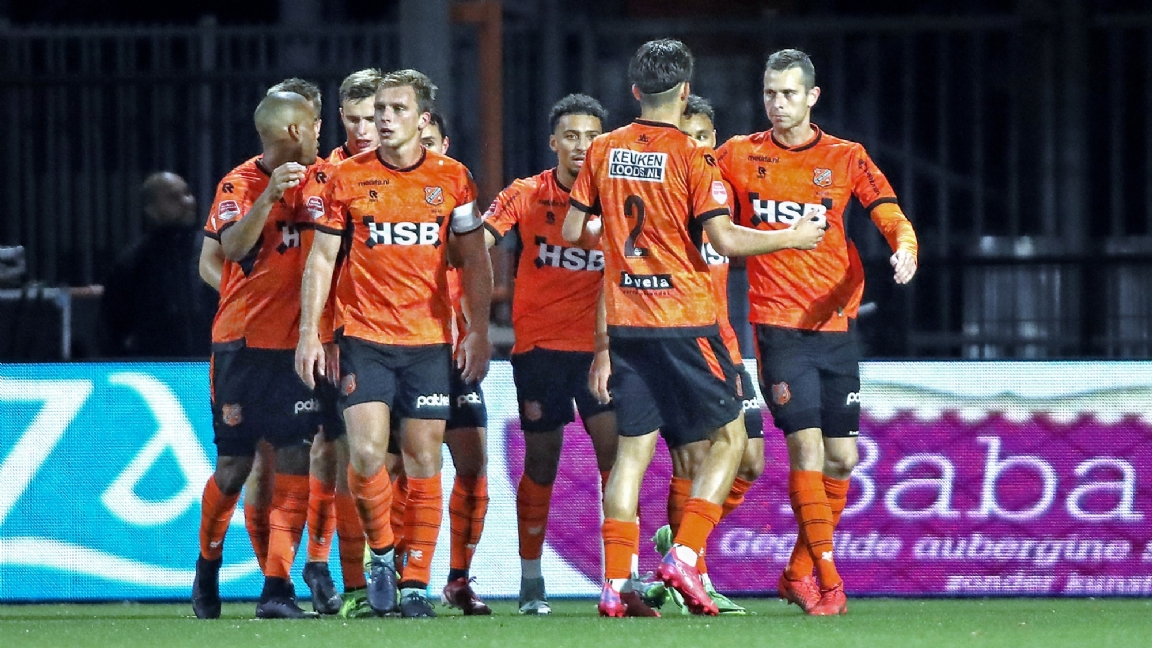 FC Volendam booked a resounding victory in the Kitchen Champion Division on Friday evening. At home, the team of trainer Wim Jonk still fell behind against Dordrecht, which, however, ended up empty-handed due to four goals by Robert Mühren: 4-2. It was already the seventh league win in a row for Volendam. At the same time, ADO Den Haag was disappointed by a late penalty against De Graafschap, which was too strong 1-0.

FC Volendam – FC Dordrecht 4-2
De Volendammer started their encounter with Dordrecht disappointingly, which took the lead in the eighth minute. Mathis Suray received a pass from behind and finished face to face with goalkeeper Filip Stankovic: 1-0. Halfway through the first half, however, the home side already put things in order. Captain Toine van Huizen made a mistake in his own defense, after which Robert Mühren was able to take over and scored the 1-1. On the stroke of the halftime signal, the striker also made it 2-1. Mühren scored from a penalty that was awarded on a handball by Anouar El Azzouzi.

Mühren also made the 3-1 from eleven meters. A foul by Van Huizen on Boy Deul was reason enough for referee Erwin Blank to award the penalty. The chance of a positive end result for Dordrecht increased when Dense Kasius was sent off with his second yellow card twenty minutes before the end. Even with ten men, Volendam proved to be the better player. A few minutes later, Mühren already registered his fourth of the evening after a close-up striker. Suray did something back in the eightieth minute, but a draw was no longer possible: 4-2.

De Graafschap – ADO The Hague 1-0
The first half did not yield any goals, but De Graafschap could take courage from their own game. From the first minute, the home side had the upper hand and there were serious opportunities. Halfway through the first half, striker Thomas Verheydt of ADO cleared a header from Jeffry Fortes on the line; moments later, a free kick by Elmo Lieftink landed on the crossbar from considerable distance. De Graafschap had the better chances in the first half, but after the break both teams had little claim to a goal for a long time. The number of opportunities played out was very limited; the biggest was for Giovanni Korte, who headed wide after a cross from Roland Baas via goalkeeper Luuk Koopmans. A penalty kick offered a solution for De Graafschap: Despite protest from ADO, Allard Lindhout pointed to the dot after an alleged violation by Jonathan Mulder on Julian Lelieveld and Danzell Gravenberch was lucky.

Past! @DeGraafschap grabs the full loot at the last minute @ADODenHaag. Substitute Danzell Gravenberch decides the game just before time from the spot ?? pic.twitter.com/xqMbAC0z4A

FC Emmen – VVV-Venlo 0-0
The first serious danger arose in the ninth minute: Jeredy Hilterman appeared face to face with keeper Lukas Zima and shot the outside of the post. On the other side, goalkeeper Michael Brouwer van Emmen prevented Sven Braken from opening the score with a clever save. Zima also prevented Jasin Assehnoun from scoring in the final minute of the first half. After the break Emmen had a large part of the ball possession. Rui Mendes still encountered Zima, but after a nice cross from Peter van Ooijen, Hilterman headed the 1-0 against the ropes. Hilterman seemed to make his second with a marker shortly afterwards, but the ball had too little momentum and was removed from the line by an extreme effort from right back Tobias Pachonik. Not much later, a cross by Lorenzo Burnet, which changed direction, hit the post.

FC Den Bosch – Young FC Utrecht 2-1
In the nineteenth minute of play, the Bosschenaren took a 1-0 lead. Kevin Felida passed the ball to Gaston Salasiwa, who in turn passed to Roy Kuijpers. The striker finished off in a cool way and made his eighth league goal. Mohamed Berte also put his name on the scoreboard on the stroke of the halftime signal, making up for a big missed opportunity from the second minute. The Belgian received the ball from Soufyan Ahannach and found a gap in the Utrecht defense: 2-0. Fifteen minutes before the end, Jong FC Utrecht did bring the tension back into the match, but despite the goal against Ayman Sellouf, Den Bosch did not relinquish the victory.

Voetbalzone is the official media partner of the Kitchen Champion Division

Brazilians from Palmeiras win for the second year...

Outrage at Villarreal with the arbitration against Barcelona

“I will not deny my conception of football”:...

Vibrating board: this is how you train your...

This is how Asturians did in Second RFEF...