Emblematic coach of French-speaking football, Paul Garbani (94) will be in the stands of the Fontenette stadium on Wednesday to attend the round of 16 of the Swiss Cup between Étoile Carouge and Basel (6:50 p.m., RTS 2). Faithful follower of the “Stelliens”, Mr. Paul received RTSsport at his home in Carouge to deliver his gaze on his favorite club.

“It’s impossible not to go see this Cup match against Basel“, launches Paul Garbani from the start.”Receiving the Rhenish must be seen as an honor. FC Basel is an example for Swiss football“, he specifies. The former coach of Carouge hopes that the public will respond in order to transcend the” small “as in his time when there were sometimes more than 7,000 spectators at the stadium.

For Paul Garbani, the Fontenette club is the starting point of a magnificent career which will see him train Carouge, Neuchâtel, Lausanne, Vevey and Urania Genève Sport (UGS) in the national league. A course marked by a record of 13 promotions, no relegation, 2 LNB league titles and a Swiss Cup semi-final. “At one point, I was even approached to take the Swiss team. But unfortunately I have never been comfortable with the German language“, slips Garbani.

There have been ups and downs, but I remain very attached to Carouge where I was able to take my first steps in the coaching profession

The adventure between Étoile Carouge and Paul Garbani began in 1957. Characterized by audacity, a game focused on the offensive and friendship for the players, the Garbani style quickly prevailed. In the summer of 1958, the coach attempted a loud bang that made a lot of noise. He replaces the entire 1st team with young players from the club. A successful bet since Carouge will be promoted to 1st league (3rd division) at the end of the season.

“There have been ups and downs, but I remain very attached to Carouge where I was able to take my first steps in the coaching profession“, indicates Paul Garbani. In 1963, he will take his team to LNB. The opportunity to see him in a very beautiful sequence of the archives of the RTS where he is interviewed by the journalist Jean-Jacques Tillmann.

It is a pride to have started in Carouge in the 2nd league and to have managed to one day reach the elite of Swiss football with this club. 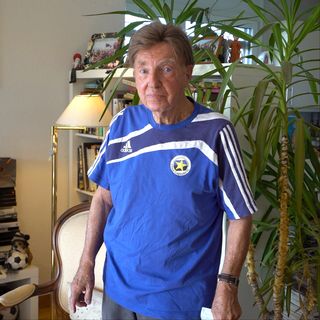 After passing through Porrentruy, Neuchâtel and Lausanne, Garbani returned to Carouge in 1976. The following year, he celebrated a promotion in LNA. “It is a pride to have made my debut in Carouge in the 2nd league and to have managed one day to reach the elite of Swiss football with this club.“.

What instructions would Paul Garbani give in the locker room before facing FCB? “Against Basel, Carouge must hold the first 20 minutes. Afterwards, the players will have to surpass themselves and the public will have a decisive role to play.“. In case of victory, the” Stelliens “would still be in the race to match Carouge’s best performance in the Swiss Cup (semi-finalist in 1977 and 1988).

Untenable at Anfield, quoted at Barça and subscribed...

Mehdi Carcela is once again pointing the nose...