Hamilton and Verstappen anticipate the Battle of the Bosphorus 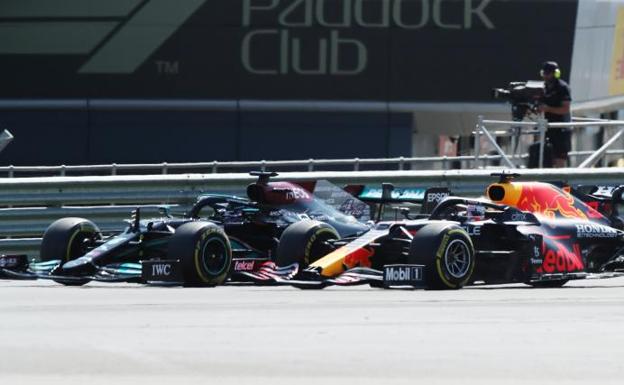 The fight between the title candidates after the exciting Russian GP moves to Turkey, where Alonso will look for the points and Sainz will have to penalize

This weekend it would be time to draw on topics and classics about Suzuka: that if the fights between Senna and Prost, the 130R and the battle between Schumacher and Alonso, the always festive atmosphere of the fans … But if something has taught fate in both In recent years, planning has become a risky sport, something that fortunately occurs less and less. Without leaving Asia (entirely), you have to look to Istanbul for a new Turkish GP.

Istanbul Park has been the scene of great fights. Lewis Hamilton achieved his seventh championship with an unmitigated victory here in 2020, so he is very clear that after reaching his 100th GP win he can hit the table at this circuit. This time he will not be so lucky: Max Verstappen has already served a penalty in Russia and arrives full of confidence after a comeback from last to second place, thanks to those last 10 chaotic laps at the Sochi circuit. Two points between the ‘morlacos’ of the championship portend what could be another memorable race.

If the fight at the top is exciting, not least in the middle zone. On the contrary: it will be much tighter, especially when this year the track has been resurfaced and, in addition, there is a slight threat of rain. Anyone who remembers what happened in Russia must be licking their lips when thinking what that can mean on a real racing circuit.

Alonso, «the idiot of the first corner»

In the run-up to the Turkish GP, all the drivers appeared, as usual, and one of the questions directed at Fernando Alonso once again brought to light the Asturian’s unapologetic character. For several Grands Prix, the issue of track limits (especially in the first laps) has become a hot topic. The FIA ​​is unable to contain drivers who jump over and over again, which hurts those who do stay on the correct line. Without punishment, offenders are encouraged to abuse this permissiveness, and other runners to imitate them.

This is what Fernando Alonso warned several races ago and fulfilled in Russia. At Turn 2, he didn’t think about it: he pulled down the middle street. Something that he had suffered in other careers, but that no one had put in the spotlight until he reported it. Now that he has been the executor, he has been questioned. Things of the galloping Anglocentrism that rampages, dominates and engulfs the environment in Formula 1. «If I get out of it, the (media) treatment is different and they ask me. I have been the idiot of the first corner on the track for almost the entire World Championship, many have passed me on the outside and nobody asked anything. Now I do, “said the Spaniard, who after the ‘tantarantán’ pointed out to journalists, this time, to the FIA:” There are different rules depending on who is judged. ”

It is not something new, and Michael Masi has been constantly pointed out: the lack of consistency in the application of the rule turns every GP into a roll of the dice.

Sainz has to row

The races that remain on the calendar will be a succession of appointments in which, who most who least, will have to start last no matter what they do on Saturdays. The engine throttle turns every grand prize into a Russian roulette, so minimizing damage will take precedence over getting a good result.

Turkey is not the perfect setting for Ferrari, on paper. After Charles Leclerc got his turn in Russia, Carlos Sainz will have the new engine installed in Istanbul Park, just as he had been scheduled for months. This implies that he will come out last and, therefore, to maintain his good line of results, he will have to star in an epic comeback.

Sainz already foresaw Turkey as the turning point to take a breath before the final stretch of the championship, and although he does not say so publicly, he is well aware of those 112.5 points he has to his credit, eight and a half more than his teammate Charles Leclerc. If Sunday ends ahead of the Monegasque, the moral blow may be almost definitive.

EA Sports is considering changing the name of the FIFA game!

“It wouldn’t change my life”

Tips from Uta Pippig: With these running units...

Guardiola: “De Bruyne tested negative, but has not...

Söder decides to play ghost games because of...