Since his Parisian debut, Lionel Messi has alternated on paper between a right winger position and a more axial attacking midfielder. For what reasons ? What is it really ? Does this have an impact on its performance? Decryption.

Discovering for the first time in his life a new club at the professional level at the age of 34, one would think that Messi, used to playing in the axis at Barcelona since 2017, would be systematically placed in this same position by Mauricio Pochettino . However, the six-fold Ballon d’Or is evolving for the moment on paper at two different positions.

The Parisian coach speaking hardly on the merits of the question like his answer at a press conference today, we must therefore take a closer look at Messi’s performance. And we can find a whole bundle of clues, especially on an adaptation to the characteristics of the opponent and a form that is still too precarious to find.

Messi on the wing: adaptation to the opponent?

If we put the last performances of Messi in perspective, we can realize certain characteristics shared by the opponents depending on whether he is moving in the axis or “side”. In all likelihood, when the opponent decides to close the axis of the field, either by individual markings in the heart of the game, or by keeping a compact structure, Messi is removed from the density with a more eccentric position. This is what we noticed against Bruges, City, or Marseille, well in place in the axis of the field. Conversely, when the opponent offered a little less axial density or security between the lines, Messi found himself as an attacking midfielder from the start of the actions (Lyon and its 4-1-4-1 rather high and floating, Rennes and its 4-4-2 in a more or less permeable zone).

The Argentinean must find his marks within his new team, and also recover his total form before giving the best of his football. This is understandable, but one might wonder if it is not counterproductive not to leave it in an exclusive axial position. But this is where an anything but intuitive idea comes into play: Messi might not be fit enough to play fully in the axis.

Classically, the attacking role on the side is harder physically than in the axis, to challenge defenders one-on-one or ensure defensive retreats. But that’s without counting on the current nature of Messi’s game, much more of paw kicks than epic ball-to-foot breakthroughs (not to mention he’s exempt from the defensive fold). Thus, one of the challenges for Messi is to find spaces to face the game, something which can be made difficult in the axis because of the athletic deficit from which he suffers and the propensity of the opponents to lock the central corridor of the field. . Messi’s very low mobility could keep him disconnected from the ball for very long periods of play.

However, on the wing (or half-space), the vigilance granted to the Argentinian is slightly less and he very regularly finds positions to distribute the game, go inside or combine with his teammates.

What is the yield on the “wing”?

One important thing to take into account though is the fact that when Messi is a right winger on paper, this very off-center position is relatively short-lived. Certainly, if Messi can stick to the sideline when the team is in the recovery phase, he actually touches the balloons in much more varied and extensive areas once the Parisians have settled in the opposing camp. A progression of the ball to which he is also no stranger.

Indeed, when he plays on the wing in the recovery phase, Messi becomes very easy to touch for his partners outside the axial density. Once the ball is in his feet, it becomes very difficult to take him and he can help break the opposing pressing by his ability to combine with others. PSG often emerges victorious from this territorial struggle and it allows the team to switch to the opposing camp.

Once higher, it is the “King’s choice” : if he stays relatively offshore, it is easier for him to find freedom in the face of the game to seek depth. But he can also go inside with the one-two, leaning on an attacker to try to strike at the entrance to the box.

Relaunch against the pressing in 4-1-4-1 of Bruges, a way out for PSG is to play on Messi who can absorb the pressure by protecting the ball before finding an inside relay. 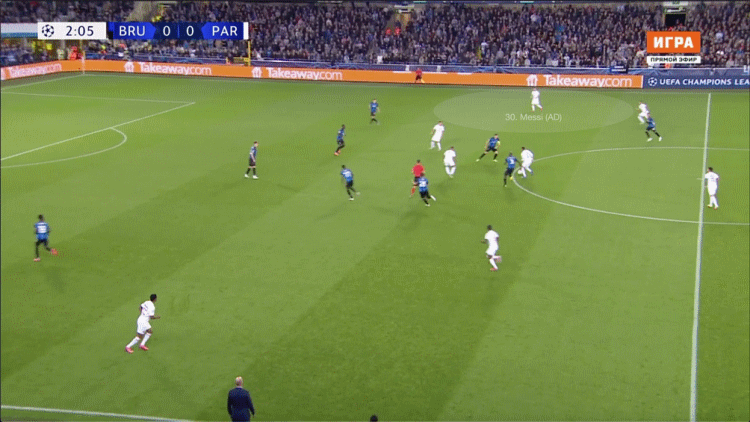 Offensively, freedom in the face of the game to receive, distribute or go inside. 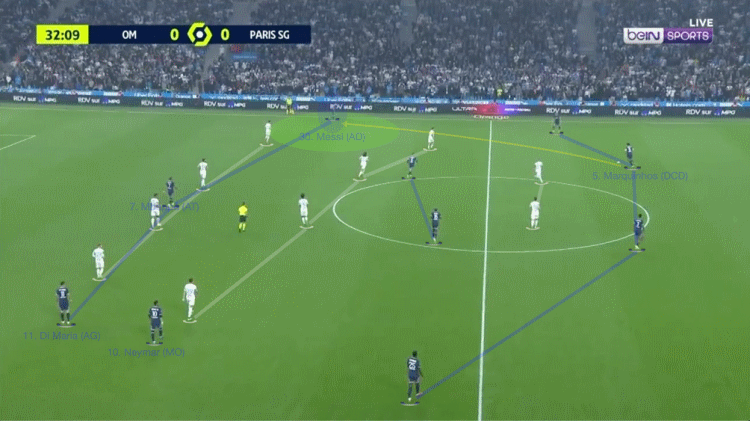 Messi is on the right, the pass line is open for Marquinhos, the Argentine has some freedom to turn immediately.

After fixing the defense on his conduct of the ball, he serves Mbappé in depth.

In the same logic of adaptation to the opposing defensive animation, Messi was used in an axial position ” initial “ during meetings against Lyon or Rennes. Two teams who share the characteristic of leaving usable spaces within their blocks. 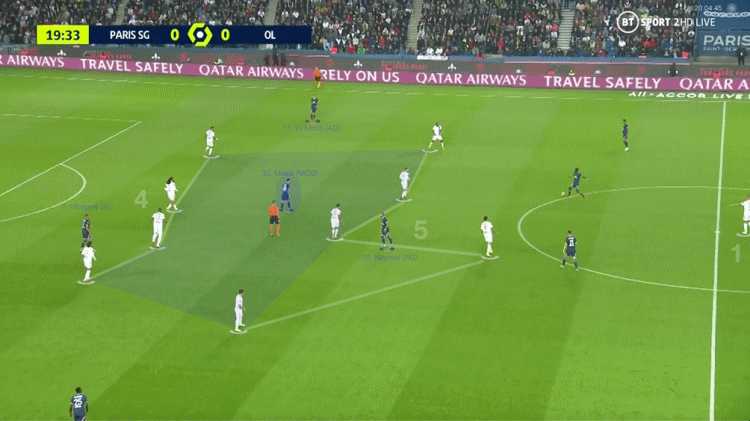 Messi between the lines against Lyon in 4-5-1, Gueye is not on target but does not find him through the pass, and the number 30 does not make himself particularly available either. 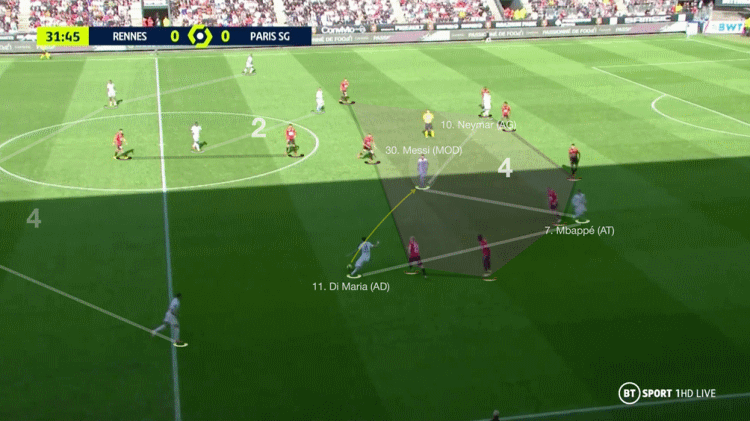 Facing Stade Rennais, Messi between the lines of 4-4-2 Rennes, requested by Di Maria. After a very good collective sequence, Messi manages to launch Mbappé in depth who finds himself a hair’s breadth away from challenging the goalkeeper face-to-face.

This being the case, if Messi is obviously able to receive the balls between the lines, we notice however that very often he attacks the axial zone in a different way. Rather than staying patiently between the lines by standing out there, Messi will get closer to the ball by picking up outside the opponent’s block, before inserting himself there by penetrating between the lines in a second time. Typically it will do this in two different ways.

Individually: stall which will generally push the midfielder closest to him to stamp him, a pressure that he can eliminate by dribbling before fixing the opposing defense once between the lines. 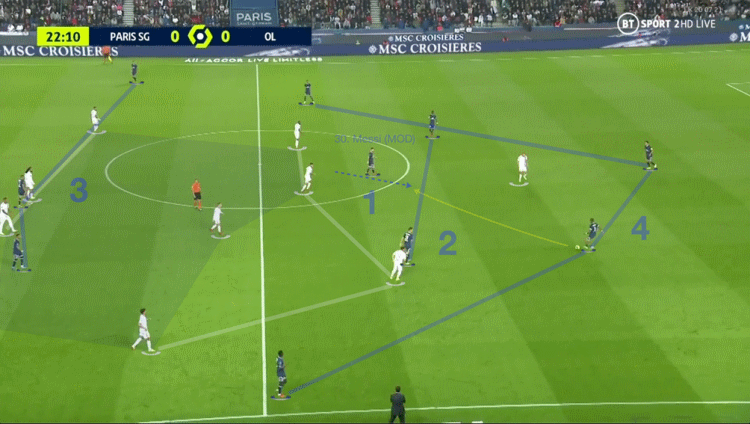 Messi leaves the Lyon block, in an axial position, and will receive the ball from Kimpembe. 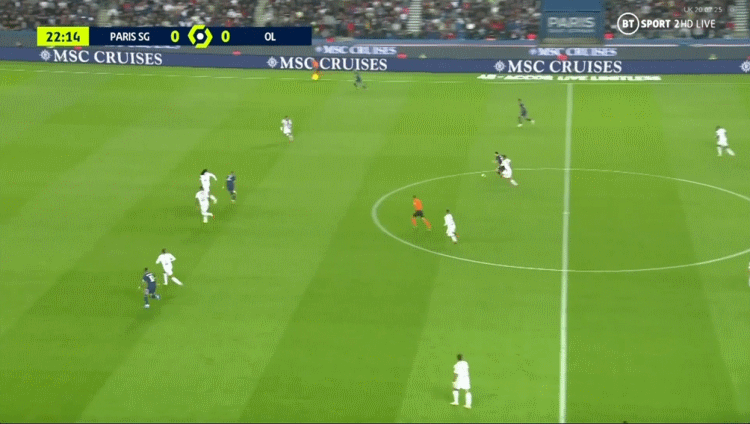 Messi challenges Guimaraes on his ball catch and passes him in front by dribbling, he then inserts himself between the lines to fix the opposing defense before serving a teammate.

Collectively: he won to request a short combination with a teammate (Neymar, Verratti) before reinserting himself between the lines. Behind, the Argentinian will most often seek to play in depth. 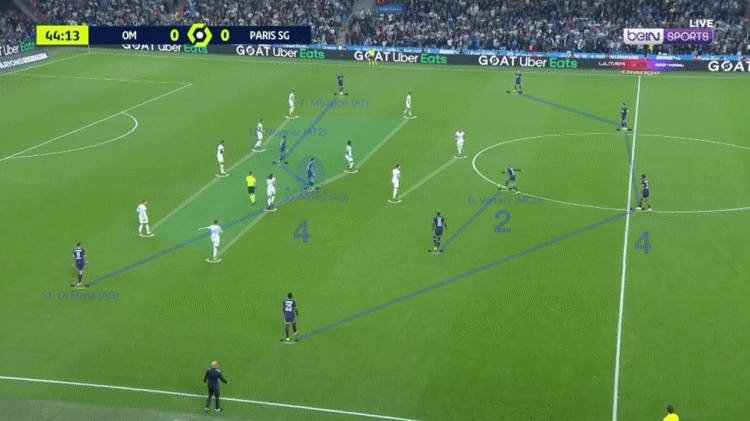 Messi is theoretically a right winger but came here in the axis, his small backwards support shows that he is waiting for a ball between the lines of Verratti. 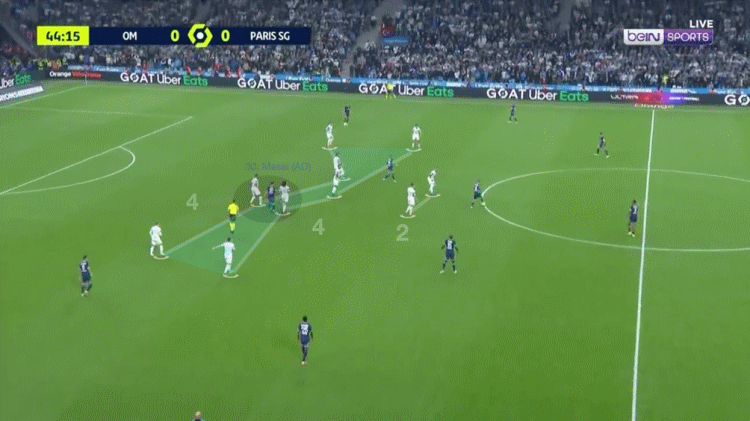 OM reacts immediately by compressing the space between the lines and completely cancels the Messi option (team in control of the axis, we remind you), Verratti is forced to rule out the game. 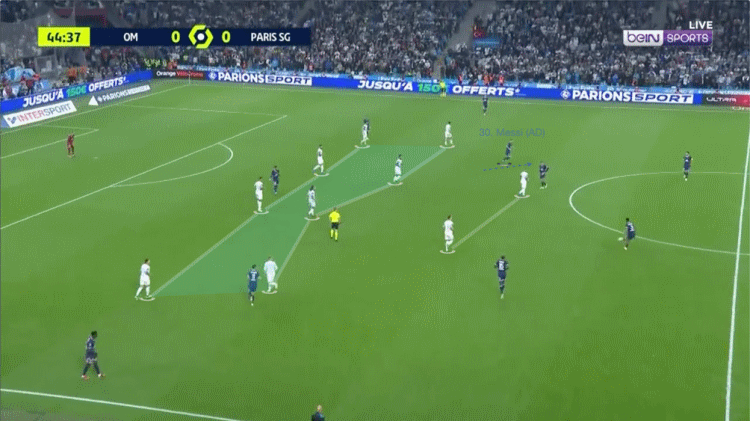 Later in the same possession phase, after wandering between the lines for a while without being a real option, Messi picked up off the block to receive the ball from Kimpembe, and attempt the short combination with Verratti.

Another action against OM where Messi frees himself from his position on the wing: 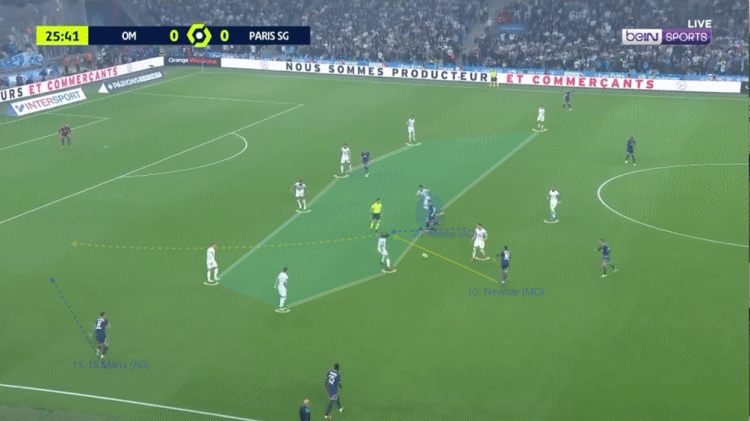 Unhooked, he only approaches the space on Neymar’s pass which then allows him to find DI Maria in depth on a perfect sequence.

Once again, go out of the density to fit between the lines in a second step.

A debate more sterile than it seems?

As explained above, Messi can find himself hitting balls along the sideline. However, most of his balloons hit are actually more in the right half-space. What begins to look like a preferential zone for a left-hander on the wrong foot who organizes and leads the offensive game.

Here are Messi’s heatmaps against Bruges, Leipzig and Manchester City: 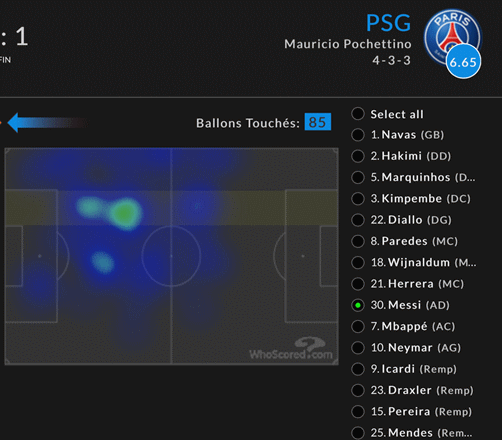 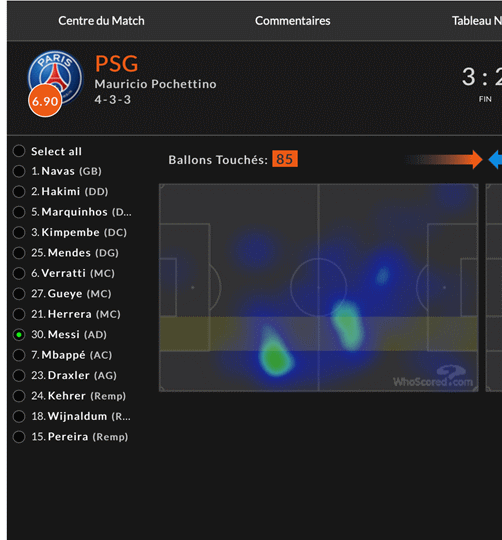 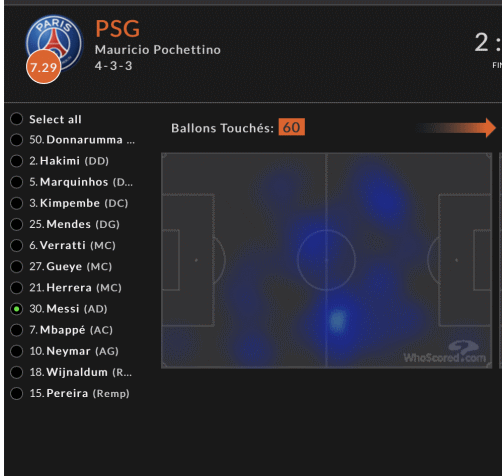 Each time a right winger on paper but, in the opposing camp, he touches most of his balls in the right half-space.

Heatmaps against Lyon and Rennes: 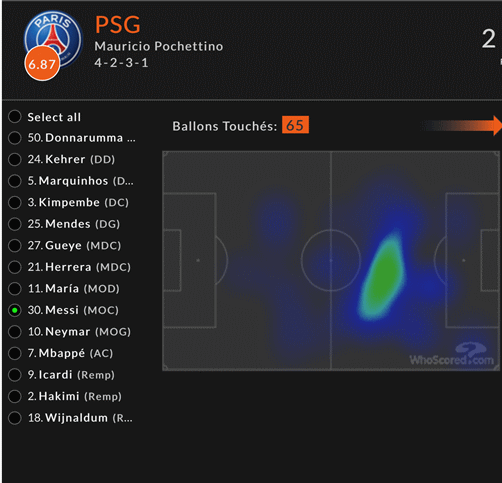 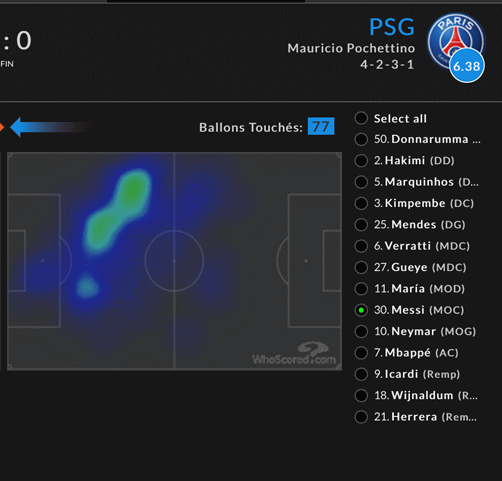 His heatmaps are more extensive, but opponents with different defensive characteristics.

One could find that, for the moment, the Argentinian does not touch enough balloons in the hot zones, but with his more or less precarious form of the moment, how much would he be able to make all the differences and especially to to make himself available very high up on the pitch as a second central striker?

With all due respect to the staff and the coach, if Messi guaranteed to score and get scored in every game in a more advanced role, it is likely that he would already play in this area. Do not forget that winning the next match remains their only obsession, and incidentally their profession.

Hypothesis: adaptation to the characteristics of the opponent depending on whether they stick the creatives at the heart of the game, or leave spaces between the lines

Against Bruges: Messi side, anti pressing + facing the game pic.twitter.com/U5OgC0x6mh

The footballer who survived five heart attacks: “I was born again”

“This is not good news”: maximum concern about...

Luis Díaz: English press qualifies him as the...

Bert Put is promoted and becomes a semi-professional...

the incredible altercation between Umtiti and a fan!

FC Barcelona’s plan to fill its coffers thanks...