Third installment of the Florentino Pérez audios: «Cristiano is an idiot and Mourinho, an abnormal» 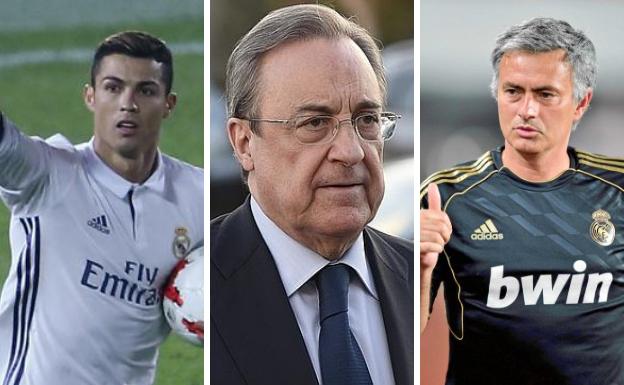 El Confidencial unveils new audios of the president of Real Madrid, this time from 2012

Third installment of the controversial audios of the president of Real Madrid, Florentino Pérez. If yesterday the turn was for Raúl and Casillas, whom he described as “big scams”,
Today it’s up to Cristiano Ronaldo and José Mourinho, the two Portuguese who have been the most visible faces in Florentino’s second stage at the helm of Real Madrid.

This time the conversations broadcast by ‘El Confidencial’ belong to October 2012, those of yesterday were at a stage when he was not president -in the period of Ramón Calderón-. On Cristiano Ronaldo, the top scorer in the Club’s history,
He said “he’s crazy”, that he’s “a fool” and “a sick man”. It also refers to one of the acts that Cristiano performed in public but that this newspaper does not reveal: “You think this guy is normal, but he is not normal, otherwise, he would not do all the things he does. The last nonsense that he did, that the whole world saw it. Why do you think that he does that nonsense? ».

Another of the Portuguese who comes out badly is Mourinho, the one who was white coach between 2011 and 2013. «Mendes does not command anything in him. Just as he does not send anything in Mourinho. Zero patatero. Even for interviews. Nothing. No fucking case. These are guys with a terrible ego, both spoiled, the coach and him, and they don’t see reality, because they could both make a lot more money if they were otherwise. AND
These are two abnormal, because we are talking about a lot of money in the field of image rights. Also, with that face that they have, with that defiant way, that everyone dislikes them … If the publicity is the opposite, it is the opposite! «.

Apparently, Florentino had the Portuguese between his eyebrows. Another Mendes man who coincided with Cristiano and Mourinho in the dressing room was Fabio Coentrao, whom he described as “tolili.” The president was not short: “That is one of the effects of Madrid.
He is another who has no head and those guys Madrid eats them. Right now he’s screwed up and Mourinho is an idiot … It’s not that he doesn’t want to play … Well, he’s a little bit subnormal. He drives without a license … That said, the pressure has overwhelmed him and that is from being sick. But the other does not care that he is sick because it kills him. ‘You’re a shit.’

This newspaper reveals what Florentino thought of Jorge Mendes also in 2007 when Madrid bought Pepe for 30 million and became, then, the most expensive defender in history: «That the 30 kilos have left here and have ended up there , insurance. Now you have to see where the bank exit is. He does that with Jorge Mendes, who is the representative of the president of Porto. With him everything is strange. Mendes would appear and pay him, which is the alibi of the president of Porto.
He and Mendes took money from the Russian with Mourinho, with Carvalho, with Ferreira … And that money, what happens is that they take it to Switzerland. Someone who is in the ointment has to get pissed off and has to give us the clue of that account in Switzerland «.