the holders of the title still locked by the Madrid defense

This Tuesday, February 18, 2020, Liverpool will be competing on the lawn of Atlético de Madrid in the round of 16 first leg of the Champions League. The Reds, crowned last year at the same stadium in Wanda Metropolitano, hope to defend their title in a style opposition between Jürgen Klopp and the team of Diego Simeone. Follow the meeting live from 9 p.m.

The club of Liverpool finds the good air of Madrid: crowned at the Metropolitano stadium in 2019, the champion of the Champions League returns to the same place Tuesday in the knockout stages of the first leg against Atlético (21:00), determined to keep his European crown since the national title seems assured. 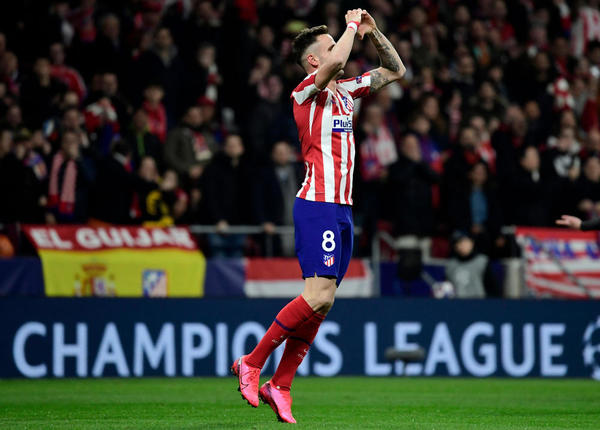 56 ‘ Liverpool are already taking their 5th corner from the game. Still nothing to report on these game phases …

52 ‘So alone! Mohamed Salah receives a wonder of center from Joe Gomez, after being forgotten. His head is not crossed enough to find the frame!

51 ‘ And as in the first period, the pressure drops. This allows Liverpool to regain possession of the ball.

49 ‘And yet Liverpool was still hot in its surface! Marcos Llorente’s back ball finds nobody at the penalty spot … Bis repeats from the first half so far, with the goal less!

49 ‘ What a defensive return from … Firmino! The Brazilian striker aborts a 3 against 2 potential for Atlético.

48 ‘ As in the first period, the Colchoneros return with envy to the field and wish to make the break very quickly.

47 ‘ With the return of Llorente, without injury or cardboard for Thomas Lemar, the tactician Diego Simeone clearly displays his defensive intentions for this second period.

46 ‘ Unfortunately for Thomas Lemar, he was replaced at half-time by Marcos Llorente. On the Liverpool side, Origi replaces Sadio Mané, who was under the threat of a red card at the end of the first period …

46 ‘ It’s off to Wanda Métropolitano! Atlético leads 1-0 and kicks off this second period.

The players will reappear on the lawn for this second period!

To everyone’s surprise, it was the defending champion Liverpool who was lead at the break. The Colchoneros have perfectly mastered their subject by entering directly into the match, a real blow for the Reds who will have to show much more quality if they want to equalize.

It’s halftime at Wanda Métropolitano! Atlético lead 1-0 against the Reds by Jurgen Klopp. Liverpool were picked cold on a goal from Saul Niguez, from the 4th minute of play. Fabinho is unhappy assisting, despite himself. Subsequently Atlético, loyal to Diego Simeone, closed the game to get a few other opportunities against.

45 + 1 There will only be one minute of additional time.

45 ‘ New yellow card, it is this time for the Madrilenian Angél Correa, after a fault of annoyance on Joe Gomez.

43 ‘ Scorer, Saul also made a very big defensive match on the actions of Liverpool, with a pressing often very fair.

41 ‘ First yellow card of the meeting for an involuntary bend in front of Sadio Mané.

40 ‘ As halftime approaches, possession begins to balance. Liverpool is much more messy by wanting to rush too much to reduce the brand before returning to the locker room.

37 ‘ Atlético tries to spare its efforts at the end of the first period, but Liverpool, them, never give up. Dangerous actions begin to arrive on the Reds side with this third corner.

36 ‘ There will have been two second chances on a corner, neither has shown flowering.

35 ‘What an action! After a Firmino technical festival, Salah is served. His strike in one touch is countered in a corner, and yet it started very well …

33 ‘ The last meeting between Atlético de Madrid and Liverpool dates back 10 years, in the Europa League. Madrid advantage for this reunion …

31 ‘ Still no hot action to report on the English side, while the Spaniards had the opportunity twice to worsen the brand against.

30′ Diego Simeone, the Madrid coach, is still involved in his meetings and almost on the field to give instructions to his players!

28 ‘ The French Thomas Lemar negotiates, for the moment, very well the few balls to play.

26 ‘ Before this action by Salah, Morata had the 2-0 ball between his feet! His coiled strike does not surprise Alisson who leaves a very beautiful parade.

26 ‘GOAL OUTSIDE THE GAME! Salah pushes the ball into the back of the net, but is immediately signaled offside, without intervention from the VAR for once …

25 ‘ Offside position on the free kick, ball returned to the Colchoneros.

24 ‘ An interesting offset free kick ahead for Liverpool, after a foul by Morata on Fabinho, a decisive passer in spite of himself on the Madrid goal.

22 ‘ Atlético has just demonstrated it, they always know how to be dangerous with very well orchestrated counter-attacks.

21 ‘What a rescue on his line from Robertson !! The Scottish defender prevents the Madrid to make the break by deflecting this shot from Morata!

Auspicious for the Colchoneros?

18 ‘ The dynamics of the game have evolved since the first 5 minutes, the danger is approaching in the Madrid area …

17 ‘ Atlético clearly wishes to operate on the counter by agreeing to leave the ball in Liverpool.

14 ‘ The center of Alexander-Arnold, after a very nice collective movement of the Reds, flies into the stands. Liverpool regain their colors after the first goal!

12 ‘ The defensive block of Atlético de Madrid is very well in place and compact, which prevents any individual flash from the Liverpool attackers.

11 ‘ Liverpool try to calm the game by trying to put the opponent to sleep after the first very intense minutes.

9 ‘ The first phase of possession of Liverpool who tries to recover from this early goal, too early.

7 ‘ The Reds seem totally overwhelmed at the start of the game. The Madrid left side Renan Lodi hurts very much on his side.

6 ‘ A single arrested kick was enough for the Colchoneros! Diego Simeone’s leg is already having an effect in this meeting.

4 ‘After intervention by the VAR, the goal is confirmed. Saul allows Atlético de Madrid to lead already 1-0 in this meeting!

4 ‘GOAL FOR THE ATLETICO OF MADRID !! SAUL TAKES BACK A FABINHO BALL ON CORNER!

3 ‘ Very good ball for Correa which seeps into the surface, but his center finds only Van Djik who clears for Liverpool.

2 ‘ First fault for Liverpool obtained by Gomez, braked by Morata.

1 ‘ Liverpool are already pressing hard on the ball carrier.

1 ‘ Let’s go to Wanda Metropolitano! The Reds kick off.

We will normally attend a big goalkeeper duel this evening in the presence of Alisson Becker on the Reds side and Jan Oblak on the Madrid side.

The players are back on the field! Soon the cult moment of the Champions League anthem that will resound in the stadium.

A huge tifo is deployed where all the stands put on the club colors. The club anthem is also sung in choir!

The Wanda Metropolitano is hot and full this evening! The players will soon be back on the field … 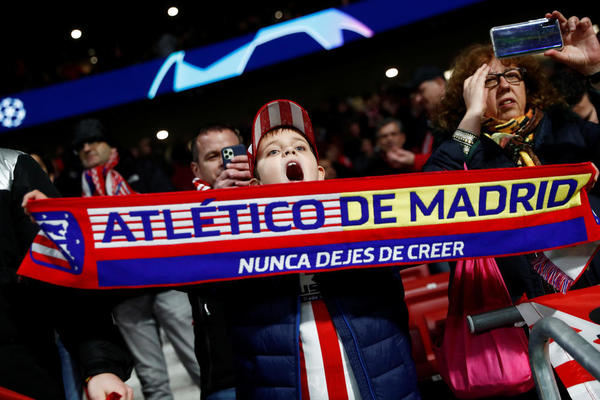 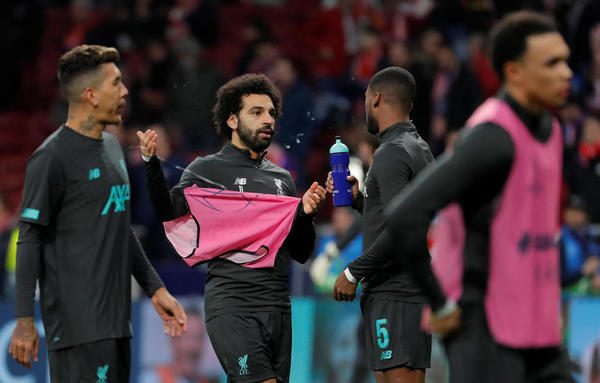 Only one French holder this evening, Thomas Lemar side Atlético de Madrid. The striker has only played 45 minutes over the last 3 games. A surprise from Diego Simeone.

Atlético de Madrid will face an opponent who has the rank of invincible in the league tonight. In the Premier League, nothing seems to be able to stop the Reds. Will the Champions League end this streak? A very beautiful poster in perspective awaits us.

The end of the Diego Simeone era? 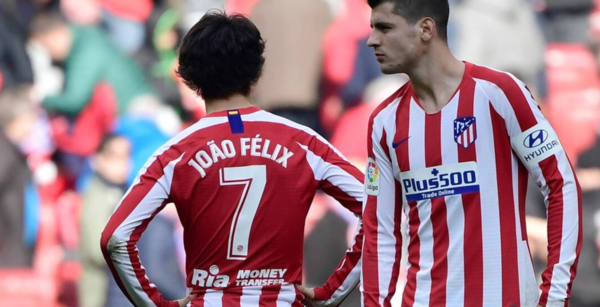 The XI of Liverpool with no surprise in attack the triplet Mané – Firmino – Salah! 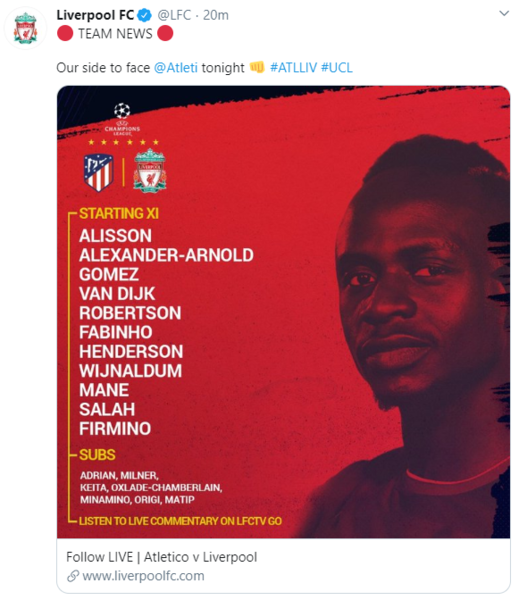 The composition of the Atlético de Madrid with titular Thomas Lemar!

Hello everyone and welcome to our site to follow the Champions League 8th final between Atlético de Madrid and the title holder Liverpool!

The challenge will be daunting against the Reds who have taken 76 points out of 78 possible since the start of the Premier League season, and are breaking all the records one by one. They are twenty-five points ahead of their closest chaser, Manchester City, who will have an even more complicated showdown against another Madrid club, Zinedine Zidane’s Real, next week.

Such a chasm 12 days before the end of the Premier League means that they could be crowned in five days, in the derby at Everton following the return match of this eighth, and lift a trophy that has eluded them for 30 years.

Those who think that such a scenario could quell Jürgen Klopp’s men’s thirst for victory are likely to be at their expense.

“Able to beat the best”

The German technician, who had taken his men to the Europa League final in his first season, hopes to make Liverpool the 5th team to play three consecutive C1 finals – with Real, Benfica, Ajax Amsterdam and Bayern Munich.

“I have no idea if we can win the Champions League again, but we really have to be ready to fight for it”said Klopp.

“What I know and what we have shown over the past few years is that we are able to beat the best”, he added.

Already a winner of the European Super Cup and the Club World Cup, Liverpool are aiming for a sumptuous five-fold this season since they are still in the running for the FA Cup.

Atlético has lost its superb

But before that, it will be necessary to discard the rough Atlético, which has lost much of its superb. The team from last season would have been a big challenge for the Reds, capable of standing up to them in terms of intensity, very airtight defensively and very dangerous offensively.

The“Atleti” is completely out of the race for the Liga title this season and is struggling to save a fragile 4th place, the last qualifier for the next C1.

Offensively, the loss of Antoine Griezmann (who left for Barcelona) hurt very much and the promising striker Joao Félix, snatched for 126 million euros from Benfica, only shines intermittently. He is in any event uncertain for the first leg, while Diego Costa and Alvaro Morata have just returned from injury.

The Atlético keep some advantages, including its organization in strict 4-4-2 which is reminiscent of that of Naples Ancelotti at the start of the season, the only team to have made the Reds throat this season (2-0 ) in the group stage.

However, his defense so famous, trademark of Diego Simeone teams having reached two C1 finals in 2014 and 2016, is likely to be put to the test by Liverpool: the Reds have won their last 11 league games in a cumulative score of 24 to 1. And as the air of Madrid seems to succeed them…

Pep Guardiola: “We will come back stronger...

Virtual deckchair: “I went to the North...

The president of Barcelona, ​​Josep María Bartomeu, has revealed that the players of the Barcelona's top squad were in favor of the salary reduction...
Read more

Former Arsenal defender Bacary Sagna hopes that William Saliba can become one of the best centre-backs in the Premier League. The Frenchman...
Read more

Although the NBA is able to catch up on some of the remaining seasonal schedule when...
Read more