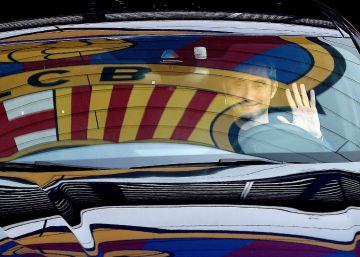 “The film, regardless of the script, always ends the same way: they kill the coach,” he confessed Ernesto Valverde in a moment of success, after winning the League and the Cup at its premiere at Barça, in the 2017-2018 season. Not even two years have passed, Barcelona also won the last LaLiga and is the leader of the current one, and the Barça club announced Monday the dismissal of Txingurri and its replacement by Quique Setién, the last coach who has won at the Camp Nou, the November 11, 2018, with Betis: 3-4 in LaLiga.

The Cantabrian coach, 61, without equipment since his departure in summer from Benito Villamarín, prevailed in the casting open from Thursday by the board of directors to coaches such as Massimiliano Allegri and Mauricio Pochettino, and sign a contract for two and a half seasons, until 2022. This Tuesday will be presented at 13.30.

Agreement between FC Barcelona and Ernesto Valverde for the termination of his contract as coach of the first team.
Thanks for everything, Ernesto. Good luck in the future. pic.twitter.com/UNBBQoLOB1

Bartomeu went to the Sports City on Monday morning after Valverde led the training and after a one-hour talk invited legal services to negotiate the settlement of the still coach of Barça. Valverde’s departure from Barcelona had to be approved by the board meeting in the afternoon at the Camp Nou.

The agreement was to fire him. Although he knew that the outcome would come, presumably at the end of the season, the skeptical Txingurri never imagined a plot as crazy as he has lived in Barcelona. Valverde had wondered on different occasions what he was still doing at Barça, after the many episodes lived, and now he has been fired by surprise by Bartomeu. Against the tide, the president decided to keep the coach in summer, lost the Cup and still impacted the Barcelona by the defeat of Anfield, continuation of that of Rome, and now dispenses with his services after the defeat in the semifinals of the Spanish Super Cup against Atlético. An untimely decision, similar to the one he took in 2015, when he dispensed with sports director Andoni Zubizarreta, and expresses the lack of a sports policy in Barça. Bartomeu, successor to Sandro Rosell, is more interested in players, signings such as those of Ronaldinho, Neymar and Griezmann, than managers and technicians trained to give continuity to the style of Barça.

Thus it is explained that some candidates to occupy the bench like Xavi and Koeman momentarily discarded the Barcelona offer due to the lack of stroke and the loss of credibility and authority of the club’s directors, obsessed with the Champions League. The fiascos in Rome and Liverpool have so much in Barcelona that they have dragged Valverde despite Barça’s league leadership alongside Madrid.

A case like Valverde’s is not remembered since the time of Radomir Antic in Madrid. Txingurri has also happened to Van Gaal, the last dismissed coach at Camp Nou, in 2003, after his first stay at Barça (1997-2000), when his successes in the Spanish tournament were conditioned by the failure in Europe against Valencia del Piojo López.

Valverde’s continuity was unsustainable since Bartomeu made the decision to replace him in Saudi Arabia. The pitos that the technician received from the fans in Yedda, delivered on the contrary to Messi, accelerated in some way the Barca end of the Txingurri. The club, however, has struggled to find a substitute for the time of the season and the uniqueness of the squad captained by Leo Messi. An alternative finally ruled out was to promote the technician of the subsidiary Francisco García Pimienta. In the end, however, Setién was chosen.

One of the illusions of the Cantabrian coach has always been to train Barcelona. “I would have given a little finger to play with Cruyff,” said Setién, an illustrious chess player, columnist and follower of the dream team and, therefore, close to the style of play that Barça always boasts. The obsession of the board of Bartomeu is that the team recovers its best version of the game and aspires to the dispute of the different titles and especially the Champions League.

The enthusiasm of Setién, also an ex-technician of Lugo and Las Palmas, eager to take on a great challenge like the one he now faces at the Camp Nou, contrasts with the dejection of Valverde, a club technician par excellence devoured by the one who is more than a club: Barça.

The European championships are stopped due to the coronavirus pandemic but Karim Benzema is still talking powder, at least on social networks. As he...
Read more

Dortmund will let Sancho go if he...

The European championships are stopped due to the coronavirus pandemic but Karim Benzema is still talking powder, at least on social networks. As he...
Read more

While it may be all quiet on the pitch for the last few weeks at Stamford Bridge, there is still a lot...
Read more

Four other athletes are accused of manipulation, including two Olympic champions, based on the McLaren report. The international sports court Cas has to...
Read more